The Effects of Alcohol on the Body

How Does Alcohol Affects Your Health 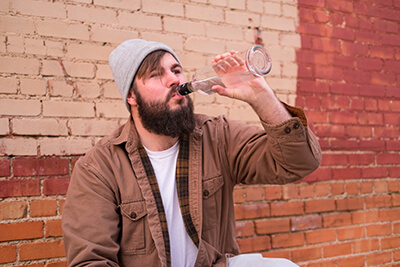 Alcohol is one of the most prevalently consumed substances in the world, used by millions of people throughout the United States on a regular basis. Alcohol consumption can have a pervasive impact on health and well-being and even light drinking is associated with certain adverse effects.

The more alcohol an individual consumes, the more of an effect it has on their system. Many people are unaware of what constitutes a standard drink and how to use such a measure to gauge their alcohol intake. According to the National Institute of Alcohol Abuse and Alcoholism (NIAAA), one 12-ounce beer with about 5 percent alcohol content is a good example of a standard drink. Five ounces of wine and 1.5 ounces of 80-proof (40 percent alcohol) distilled spirits or liquor are also examples of one standard drink.

According to NIAAA estimates, 16 million people in the U.S. have what’s known as an alcohol use disorder (AUD), which is a chronic, relapsing condition characterized by compulsive, uncontrollable, and debilitating alcohol use. Knowing the definition of a standard drink can be useful in determining whether a person may already be problematically drinking, which could increase the risk of developing AUD, in addition to a myriad of other significant health issues. 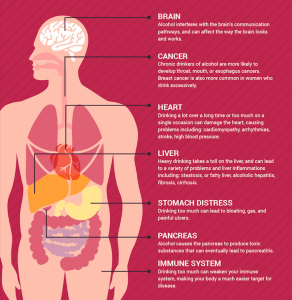 How Do You Calculate BAC?

Alcohol’s intoxicating effects will be experienced differently as consumption increases. As a person drinks more alcohol, their blood alcohol concentration (BAC) increases. Here are the symptoms commonly associated with certain levels of BAC:

What Are The Bad Effects of Alcohol? 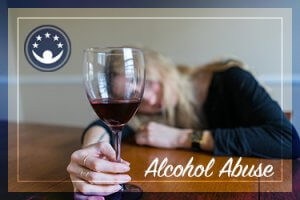 When one thinks about the effect that alcohol can have on a person, a change in behavior is often one of the first things that comes to mind. Alcohol and altered behavior have essentially become synonymous with each another. Alcohol interferes with normal brain communication, thus changing a person’s behavior and mood. The ability to think clearly is often inhibited, and enough alcohol consumption can drastically affect motor functioning via its effects on the brain. Commonly seen effects on the brain and the rest of the central nervous system (CNS) include slurred speech and issues with coordination.

Alcohol may have more drastic effects on the central nervous system in the long-term. Pain, odd sensations, and numbness in a person’s hands or feet can arise due to the more chronic changes in CNS pathways. Retinal vascular changes and other damage to the eyes may also occur, over time.

The heart is one of the most important organs in the human body, and it also happens to be especially susceptible to the effects of alcohol. While heart-related complications caused by alcohol are most common in people who participate in excessive consumption for a prolonged period of time, drinking too much on a single occasion can have negative effects on the cardiovascular system as well. Some of the cardiovascular effects of alcohol include:

Some research has indicated that drinking very moderate amounts of alcohol can actually improve heart health, but excessive consumption puts a person at risk for complications. Heart attack and heart failure are very serious problems associated with long-term alcohol consumption.

Liver damage is commonly associated with the consumption of alcohol as well. Cirrhosis of the liver is a condition that results from chronic inflammation and scarring of the liver tissue, according to the U.S. Library of Medicine. Sclerotic or scarred tissue impair vital liver functions, such as cleaning the blood and helping to fight infection. Alcoholism is the most common cause of this condition, and it can also result in fatty liver, fibrosis, and alcoholic hepatitis. In 2013, nearly half of the deaths from cirrhosis of the liver in the United States were due to alcoholism, and it accounted for about three-quarters of deaths from cirrhosis in those aged 25-34.

The digestive system can suffer significantly due to the effects of alcohol. Beginning with the mouth, alcohol can do significant damage to the salivary glands, gums, and tongue. Tooth decay is not uncommon among heavy drinkers. Esophageal problems can arise in the form of ulcers, which can also form in the stomach. Combined with a decline in liver function and increased blood pressure, blood vessels in the esophagus may also become enlarged and at-risk of rupture.

In other parts of the gastrointestinal system, the pancreas can be also affected by alcohol. Drinking, even occasionally, can lead to acute pancreatitis, which is inflammation of the organ. Complications to arise from pancreatitis include endocrine disorders (e.g., diabetes), a spilling of digestive enzymes into the abdomen (a painful condition sometimes referred to as autodigestion), pseudocyst formation, and permanent organ damage (chronic pancreatitis). Surgery may be required to manage some of these potentially-fatal complications.

A woman may experience the disruption of her menstrual cycle due to alcohol abuse, and menstruation can even stop completely in some cases. Some women experience infertility in connection with alcohol use, and the risk of pregnancy and birth complications increases. A woman drinking while pregnant can lead to a fetal alcohol spectrum disorder in the child, a range of conditions with both physical and cognitive ramifications.  The Centers for Disease Control (CDC) estimates that between 0.2 and 1.5 infants per 1,000 births experience some degree of fetal alcohol syndrome.

An individual’s immune system is often affected by alcohol use as well. This can make a person more susceptible to a wide variety of viruses and illnesses, ranging from common to very serious.

Long-term alcohol use can put one at a greater risk for certain conditions, such as tuberculosis, pneumonia, and even cancer.

More about the Effects on the Brain or Body

Alcohol can also have dramatic effects on an individual’s reproductive system. Men who drink excessively often experience problems with erectile dysfunction, a condition that results in difficulty achieving and/or maintaining an erection.

Multiple studies over the years have found a correlation between alcohol consumption and testosterone production, according to NIAAA. Alcohol appears to inhibit testosterone and other hormonal secretion, as alcohol can be directly toxic to the hypothalamic-pituitary-gonadal system. Low testosterone levels can result in diminished male physical characteristics and have been associated with a greater risk for prostate problems in the future. Alcohol has also been known to reduce sperm production and alter sperm structure.

Light and moderate alcohol use are not associated with significant weight gain and obesity, but a study published in Current Obesity Reports found that heavy drinking is consistently related to weight gain. Alcohol is high in calories and can alter cognitive processes and metabolism (leading to poor nutritional choices and impaired macronutrient processing). The volume of alcohol consumed appears to be the most significant factor in affecting a person’s weight, but the intensity and frequency of drinking also seem to have an effect.

The Significance of Alcohol’s Effects on the Body

It is apparent that alcohol can have extremely drastic effects on the various systems of the human body. The short-term effects on the brain and other parts of the body can be very serious, especially as more alcohol is consumed in a short amount of time. Long-term effects can be even more dire and lead to a multitude of diseases and life-altering conditions.

In order to reverse or improve the effects of alcohol on the body, a person should reduce the amount they drink or abstain from drinking altogether. For many individuals with alcohol use disorder, and for anyone with significant physiological alcohol dependence, professional treatment is needed to safely stop drinking.