An impulse control disorder is a condition in which a person has trouble controlling emotions or behaviors. Often, the behaviors violate the rights of others or conflict with societal norms and the law.1

According to data from the fourth edition of the Diagnostic and Statistical Manual of Mental Disorders (DSM-IV), about 10.5% of the general population is estimated to have an impulse control disorder.3

Males may be slightly more prone to impulse control disorders than females, and these disorders may commonly co-occur with other mental health disorders or with substance abuse.1

Impulse control disorders may be overlooked or misdiagnosed, meaning that many individuals suffering from these disorders may not get the help they need. A better understanding of the disorder can help close the treatment gap and get individuals proper care to improve symptoms. Treatment for impulse control disorders often involves behavioral therapies, and medications may also be beneficial.

There is no single cause for impulse control disorders. Temperamental, physiological, environmental, and genetic factors may play a role in the development of a disorder.1

About 19.7 million people in the United States aged 12 and older battled a substance use disorder in 2017, the National Survey on Drug Use and Health (NSDUH) reports, and about 8.5 million Americans age 18 and older suffered from co-occurring substance abuse and mental health disorders in 2017.5

Impulse control disorders and substance use disorders frequently co-occur. Studies have found that:6

The two types of disorder also share similar features. For example, both impulse control and substance use disorders are characterized by compulsion and a lack of control—over a behavior or use of a substance, respectively. People with either disorder also experience a craving to use the substance or carry out the behavior, and both disorders are believed to involve the dopaminergic “reward system” of the brain.7

Depression and anxiety disorders are also comorbid conditions with impulse control disorders. The National Institutes of Health reports that as many as 82% of people suffering from intermittent explosive disorder have a co-occurring substance abuse, anxiety, or depressive disorder as well.8

How to Get Help for Co-occurring Disorders

Often, a loved one or family member may be able to help the person recognize the need for and the potential benefits of a specialized treatment program. An intervention is a structured meeting between the people in someone’s life who may be impacted by the substance abuse and/or untreated impulse control disorder. Family members, loved ones, coworkers, and other important people in an individual’s life may wish to be involved. The main goal of an intervention is to help the person seek out and enter a treatment program.

Since some impulse control disorders are characterized by aggression, violence, and bouts of rage, it is helpful to have the input and guidance of a professional interventionist who is trained to plan and carry out an intervention for the safety of everyone involved.

Typically, the intervention is planned in advance. Loved ones may write down specific instances where the person’s negative behaviors have impacted them and share them during the meeting. The intervention is meant to be nonconfrontational. Participants should stick to “I” statements, talking about how certain situations made them feel and not point fingers.

An interventionist can structure an intervention so it goes smoothly and stays focused on the main goal—getting the person into treatment. The Association of Intervention Specialists (AIS) is a member organization that can help loved ones find a professional interventionist nearby.

Treatment programs for co-occurring disorders may be either residential, where the person lives on site for a period of time, or outpatient, where the person attends treatment for some portion of the day and goes home at night.

Inpatient or residential programs often consist of individual and group therapy, some level of medical care, supplemental/alternative therapies such as art therapy or meditation, and 12-step meetings. Residents also participate in activities together such as movie nights or outdoor recreation.

The intensity and duration of symptoms, potential severity of a person’s dependence on a psychoactive substance, and other factors such as physical health dictate what type of treatment program would be best. For example, some people may require a period of detox before they begin treatment. Detox is sometimes available at inpatient/residential programs but can also be done in standalone facilities or hospitals.

In the case of co-occurring disorders, integrated treatment is considered superior when compared to separate treatment for each disorder.9 This type of treatment takes both disorders into account.

Impulse control disorders and drug or alcohol addiction may be treated with a variety of therapies within a treatment program.9

Therapy can take place in an individual, group, or family setting. For parents of adolescents or children with impulse control disorders, treatment may also include working with the parents on how to respond to their child’s behaviors in a positive manner.2 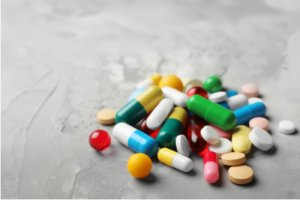 Medications may aid in the treatment of impulse control disorders, but no drugs are specifically approved to treat these disorders.

Selective serotonin reuptake inhibitors (SSRIs) are antidepressant medications that have been studied for the treatment of impulse control disorders. For example, Frontiers in Psychiatry reported improvement in aggression and irritability in people battling intermittent explosive disorder who took Prozac (fluoxetine).6

The opioid antagonist drug naltrexone, which is often used in the treatment of opioid dependence, may be useful in treating kleptomania as well as addiction. Other medications such as glutamatergic agents and mood stabilizers are also being researched for the treatment of these disorders.6

Medications can also be used for other disorders that people will impulse control disorders and substance abuse may struggle with such as attention-deficit hyperactivity disorder (ADHD), depression, or anxiety.2

If you or someone you care about is struggling with an impulse control disorder and/or substance abuse, contact us today at Or you can fill in our online insurance verification form below to find out if your insurance provider may be able to cover the cost of addiction treatment.

Last Updated on March 15, 2022
Share
Scot Thomas, MD
Dr. Scot Thomas is Senior Medical Editor for American Addiction Centers. He received his medical degree from the University of California, San Diego School of Medicine.
Related Topics
Related Tags
co-occurring disorders
Don’t wait. Call us now.
Our admissions navigators are available to help 24/7 to discuss treatment.
Why call us?
Get addiction help now (24/7 helpline)We’re here for you every step of the way.