Marijuana Detox: How to Detox from Weed & How Long Will It Take?

Marijuana, commonly known as weed, is a drug derived from the cannabis plant for the mind-altering effects produced by THC. According to the National Institute on Drug Abuse (NIDA), weed is the most commonly used illegal drug in the US.1 Marijuana is one of the most commonly used substances in the world, next to alcohol, and the rate of marijuana use in people aged 12 and older grew from 11% to 17.5%.2

For many people, the use of marijuana doesn’t cause the same alarm as the use of other drugs. But the truth is: the active ingredient known as THC may cause marijuana to be addictive and may result in effects such as mood changes and impaired memory. American Addiction Centers provides medical detox and treatment to support those with substance use disorders (SUDs). If you’re battling an active addiction to weed, please reach out to one of our admissions navigators at

People have explored many different avenues for how to experience the effects of marijuana. Weed is most commonly smoked in the forms of hand-rolled joints or through pipes. Vaporizers are another alternative way of consuming weed. Additionally, there are many recipes out there for ways to bake weed into cookies and brownies, or mix it into butter, tea, and oils.1 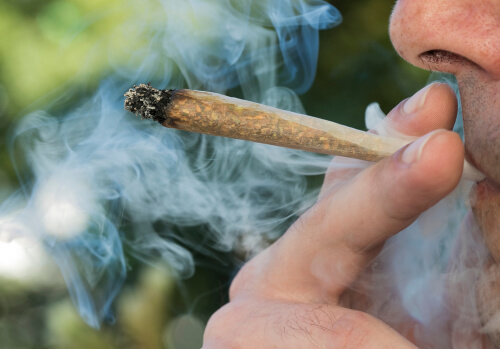 The effects of weed are felt when THC, the active ingredient in marijuana, enters the bloodstream and makes its way into the brain. Some of the symptoms of a high from weed include:

When too much weed is consumed at a given time, people can experience hallucinations, delusions, and even psychosis. The effects of weed usually set in after 30 minutes to one hour of ingesting it and can last for a few hours at a time.

NIDA explains that long-term negative effects of chronic marijuana use are a concern. Particularly when used by adolescents, weed can impair thinking, memory, and important learning functions that form connections in the brain. Researchers are still trying to understand if any sustained long-term damage is caused by marijuana misuse, but they have already observed examples of lowered IQ in adults who used weed since they were young.3

Addiction to weed is possible. There are both physical and psychological side effects caused by using weed.3 Physical symptoms may include breathing problems, increased heart rate, nausea, and vomiting. Psychologically, people who use marijuana may also be at risk for hallucinations, paranoia, disorganized thinking, depression, anxiety, and suicidal ideation.3

It is also dangerous for women to use marijuana while pregnant. Marijuana use by pregnant women has been linked to low birth weight, premature birth, and other negative impacts.5

While a life-threatening overdose of marijuana has never been reported, it is possible to overdose to the level of experiencing extreme symptoms, such as anxiety and paranoia. People occasionally end up in an emergency room when they have a psychotic reaction to marijuana. Likewise, extreme dizziness that leads to nausea and vomiting can causes people to seek medical treatment.

Some pharmacological interventions help in the treatment of cannabis withdrawal, including CB receptor agonists and other drugs that may be used to address specific withdrawal symptoms, such as anxiety.6 Behavioral interventions and personal therapy have been successful in helping those trying to get and stay sober. In an outpatient or inpatient detox program, medical professionals can provide medications to treat withdrawal symptoms, such as nausea or headaches, in order to aid the detox process. Doctors may also recommend patients gradually taper down the amount of weed that they use in hopes of making withdrawal symptoms less severe.

Find Marijuana Detox Centers Near You

Risks of Detoxing on Your Own

The greatest risk of detoxing from weed on your own is relapse. Withdrawal symptoms can be uncomfortable, and without a strong support network in place, the urge to use more weed can be overwhelming. When you choose to detox in a treatment facility, you have the support of peers and healthcare professionals to see you through this difficult transition period.

Fortunately, the physical risks of detoxing from weed are typically not as extreme as other drugs. Stomach issues (such as nausea and vomiting) and subsequent dehydration are the greatest symptoms to be aware of. Taking extra precautions to keep yourself hydrated or having a close friend nearby to monitor these physical symptoms are good safeguards to have in place.

In addition to weathering the physical symptoms of withdrawal, many people experience a psychological adjustment to becoming sober. Oftentimes, feelings of anxiety and depression can present following physical detox. When detoxing by yourself at home, it can be difficult to try and navigate these feelings. At a comprehensive treatment facility, mental health professionals can help you address these feelings in a healing and constructive manner.

Because detoxing is a physically and emotionally challenging time for most people, it is important to have many supports in place if you want to quit marijuana. The absolute best way to detox from marijuana is with the help of a medical professional or at a professional detoxification center. Professional detox centers can help mitigate the risk of relapse and alleviate or treat a variety of marijuana withdrawal symptoms. Do NOT try to detox from any drug, including marijuana, on your own or without the help of a medical professional.

Some other tips besides seeking medical assistance to help ease the detox process include:

Following physical detox from weed, programs like Marijuana Anonymous (MA) offer continuing long-term support in the form of sympathetic and nonjudgmental support groups. Becoming part of a healthy and supportive community can be a motivating and essential component of maintaining sobriety.

Additionally, you must stop thinking about yourself as a marijuana user and have confidence that you can maintain sobriety. Share your new goals with trusted family and friends so you have people who are ready and willing to support your sustained sobriety.

Marijuana detox kits and drug tests are typically sold on online marketplaces and in stores and tend to advertise that they can help you pass a drug test – even if you recently used marijuana. Though marijuana detox kits are legal, marijuana detox kit manufacturing and sales are only lightly regulated in the United States, meaning that their safety and efficacy is extremely ambiguous.6 Not only are marijuana detox tests arguably ineffective, but they can also carry uncomfortable side effects.6 One study found that a man who used a marijuana detoxification kit experienced a case of psychosis as a result of consuming this detox drink or kit.6

If you are unable to quit using marijuana in time to pass a drug test for a reason such as employment, you may want to consider reaching out to your doctor or a reputable substance abuse treatment center to inquire about your treatment options.

What Do Marijuana Drug Tests Look For?

Marijuana drug tests tend to look for the amount of cannabinoid tetrahydrocannabinol (THC) and trace amounts of cannabis in your body. If you are an infrequent cannabis consumer and consume marijuana less than two times per week, urine samples may only test positive for a few days from the last use. If you are a regular marijuana consumer, however, this may result in your urine specimens testing positive for THC for over seven days and sometimes 21 days or more.7