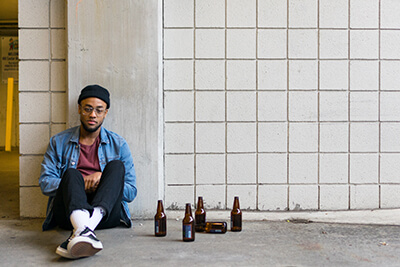 Binge drinking is defined by sustained or heavy drinking and may or not link a drinker having an alcoholism disorder.

For estimation purposes, this would comprise about four drinks for women and five drinks for men in a two-hour period of time. In addition, binge drinking is defined by the Substance Abuse and Mental Health Services Administration (SAMHSA) as drinking five or more alcoholic drinks on the same occasion at least once in the past 30 days. Heavy drinking is defined as drinking five or more drinks on the same occasion five different days in the past 30-day time period.

Depending on the other issues associated with heavy drinking and binge drinking, neither or both could be part of an alcohol use disorder.

Some Facts about Binge Drinking

Based on data from national surveys, it appears that individuals who are male, under the age of 34 or over the age of 65, and have household incomes of $75,000 or over are at the highest risk to binge drink. Nonetheless, binge drinking appears to occur across all age groups, income levels, and genders.

The Consequences and Costs of Binge Drinking in the United States

There are a number of consequences that occur both individually and to society in general as a result of binge drinking. The research indicates that:

Health problems associated with binge drinking include the following:

There are some institutional solutions to decrease binge drinking that are supported by empirical evidence. These societal solutions include:

The issue with some of these controls is that many people in the United States object to strict government supervision of business and personal choice, and many are in objection to increasing taxes on any item or service. However, these large-scale types of interventions would have the effect of decreasing binge drinking significantly and, as a result, decreasing the cost of excessive alcohol use in the United States.

Do People Who Binge Drink Need to Get Treatment?

Briefly, the negative consequences that would suggest that an individual needs treatment for binge drinking include:

One can review the American Psychiatric Association’s diagnostic criteria for a substance use disorder that includes both the notions of substance abuse and addiction to alcohol to learn more about the diagnostic qualifications for an alcohol use disorder.

Any person who is assessed by a licensed health professional and meets these diagnostic criteria most likely needs to be involved in some form of treatment for an alcohol use disorder or binge drinking behavior. Moreover, individuals who binge drink and believe they have issues with drinking, desire to stop drinking, or want to cut down on their drinking should seek treatment whether they meet the diagnostic criteria for a substance use disorder or not.