EMS Responders – The Stress is Killing Us 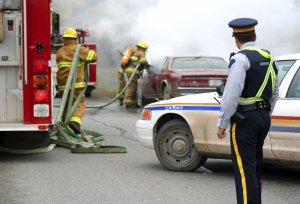 EMS Responders – The Stress is Killing Us

If you, as a child, told people you wanted to work in Emergency Medical Services when you grew up, it’s doubtful anyone would have warned you of the stress, the burnout, the up to 36% rates of depression, the inordinately high rate of suicide that comes with EMS work. EMS World magazine has looked at data on this pervasive, yet underreported problem to aid awareness that can lead to education, treatment, and prevention.

Some of the events along the chain leading from stress, to burnout, to suicide are simply inherent in the EMS business — long shifts, high call volume, sleep deprivation, lack of administrative support, low pay and competitive environment. And it would be stating the obvious to talk about the stress of the calls themselves.

The combination of stress and poor sleep hygiene or sleep deprivation (72% of EMS providers are poor sleepers) is a killer in itself. Add fast-food eating habits, and you have the reason that first responders score at the top of the list of professions with the highest incidence of heart disease.

Contributing to the burnout, according to the EMS World article, was the “overuse of the 9-1-1 system.” Another article, this one in the Denver Post, cited an emergency system in which 30% of EMS calls did not result in a hospital admission, with calls on record for such things as twisted ankles.

The L.A. Times reported that “Emergency dispatchers in L.A. County take approximately one 911 call every minute of every day.” And later on, the article reports, “According to the L.A. County Fire Department, whose paramedics answer 911 calls, nearly two-thirds of all calls are “bogus.”

Financial fissures across the country, whether personal or institutional, are adding to 911 overload. Wherever a lack of resources exists, it seems callers look to EMS responders to take up the slack. Individual non-life-threatening 911 calls often come from those who have no insurance coverage, who can’t afford medical care. But institutions are taking the same course of action. A New York Daily News article cited about 25% of 911 calls coming in from schools are also attributable to non-life-threatening situations. The article reports:

“[New York] Schools called 911 a whopping 3,600 times during the last school year to deal with non-suicide-related mental health problems….’These schools don’t have the resources to deal with students who are either having a bad day or having issues going on,’ said Nelson Mar of Legal Services NYC-Bronx.'” (Rachel Monahan)

The New York schools’ rampant 911 problem is ongoing – as noted by this recent tussle over using 911 for discipline.

In Settlement with Families, NYC Agrees to Stop Schools from Using 911 for Discipline http://t.co/gOFrDPtDU7 via @WNYC

Looking out for fellow EMS workers can save lives

The EMS World article asks responders to look after their EMS colleagues. As most of us know, it’s not necessarily the high visibility disasters that eat away at the purposefulness and grit of an EMS responder. “Instead,” the article warns, “watch for the new father who just performed CPR on an infant the same age as his own, or the provider who just watched his or her friend die following a motor vehicle collision.” These PDIs (personally disturbing incidents) are a prescription for buried, long-term stress that can, over time, become exhausting. Maintaining a vigilant, caring awareness of co-workers is the best way to catch signs of vulnerability, for example, someone consistently displaying an increased startle response.

After becoming aware, take initiative. Begin by asking candid questions, and strive to be a good listener. Initiate the hard conversations. Offer support, and make it your business to learn where professional support can be found.

While a sympathetic ear can help relieve stress, things are not necessarily going to get better for the EMS responder. But much like EMS work itself, it is easier to find and carry out solutions as a team than as a struggling individual, alone in a bad place.

And it’s not just about helping the other guy. Ideally, every EMS responder takes actions, before PDIs or other stress factors accumulate, to minimize the impact of the unavoidable stressors that come with the job. Knowing ways to cope with stress, exhaustion, and work overload can help whole departments become stronger and tighter.

Next Week: How EMS workers can protect themselves against killer stress.